In line with current government guidance we are working from home, but it's business as usual. For the quickest response please email us at enquiries@awardsintelligence.co.uk or use the enquiry form on this page in the first instance, rather than calling.

There are considerable regional imbalances and have been for many years, Yorkshire and Humber having the lowest proportion of people with an honour in England according the latest data I’ve seen. Here’s the full run down, courtesy of the Sunday Times: 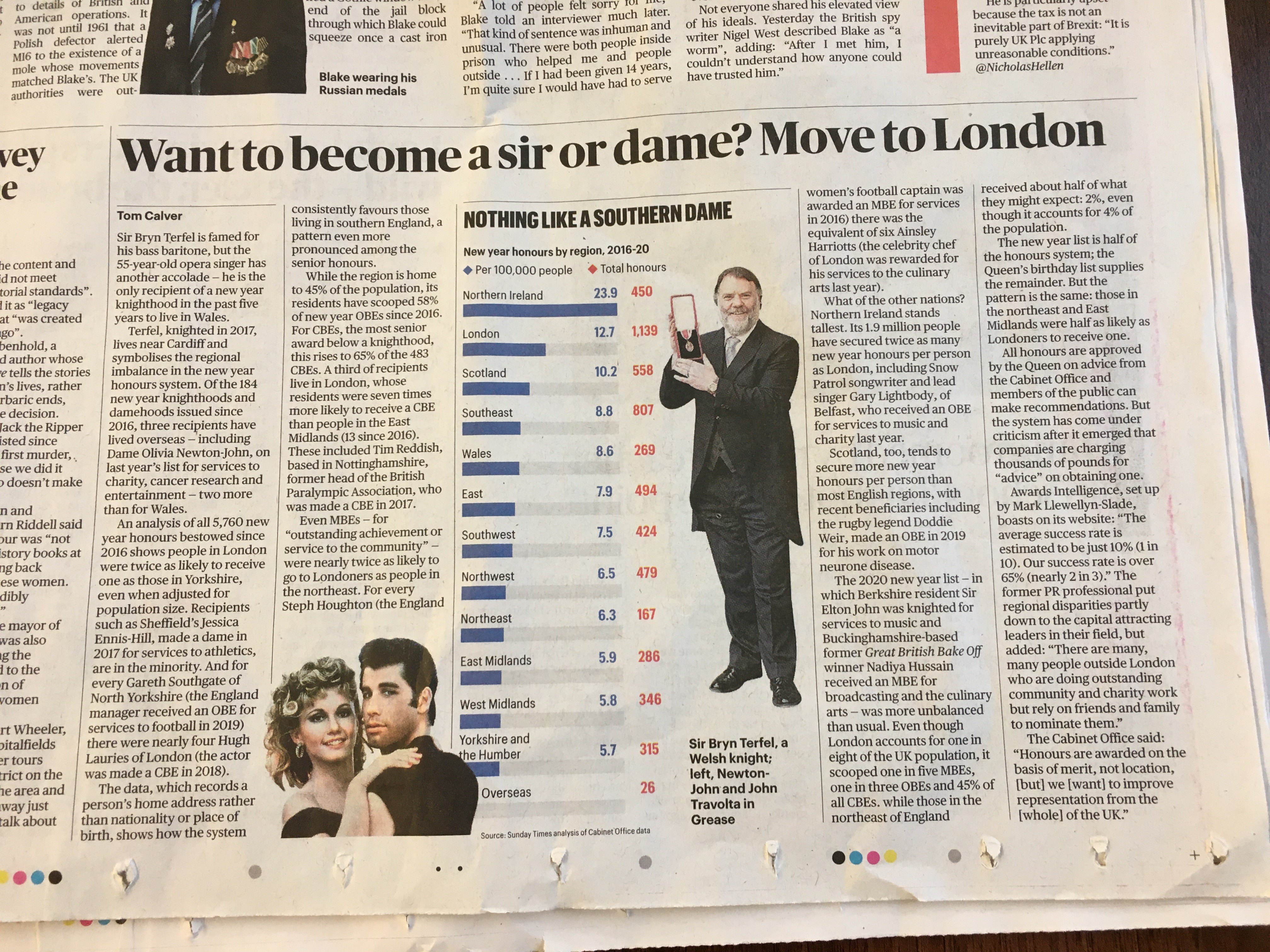 The reason London has the highest is no doubt because it tends to act as a magnate and attracts leaders in their field whether they be eminent business leaders, medics, academics, actors, pops stars or whatever field they may be in.

Having said that, there are many, many people outside London who are doing outstanding community or charity work or running amazing businesses but are reliant on friends and family to nominate them.

They can’t put themselves forward and the Cabinet Office won’t know about the great work someone is doing in their village if no one bothers to put them forward.

Awards intelligence have been heavily advertising across the North of England, regionally and indeed in Wales, Scotland and Ireland for the last decade or so, both online and via the mainstream media.

We are doing all we can to raise awareness of the honours system outside London, regularly appearing on regional radio and TV for example as well as national stations.

We regularly do interviews on BBC Radio Lancashire, Solent, Devon, Cornwall, Leeds and Wiltshire to name but a few, so there does seem to be strong interest in the honours system right across the UK.

It seems that some people outside London may be more hesitant and perhaps less confident when it comes to making honours nominations. They might get put off by the glitz and glamour that comes with the inevitable media focus on the relatively small number of celebrities who get them.

As the Cabinet Office comment in the article above say’s, the government are keen to redress the regional imbalance’s so if you know someone who is worthy, get them nominated, wherever they live in the UK.

Here’s an interview we did on Radio Yorkshire on this subject if you want to find out more:

If you are not sure if someone is worthy, email us at enquiries@awardsintelligence.co.uk and we will arrange a free, honest telephone assessment of their chances of success for you.

BACK TO THE HUB
CONTACT US
Scroll To Top