There are three key questions that I and my team get asked a lot. Therefore I thought it would be a good idea to raise and answer them for you, our army of loyal and much-loved followers.

How much does a professionally drafted Queen’s honour nomination cost?

Great question and one I get asked by potential clients and journalists alike, given that our fees range from £4,900 to £40k. We have a broad spread of price points to make what we do as accessible to as many worthy people as possible.

The price points are based primarily on the length of the nomination, the number of letters of support we draft and whether you want me directly involved in addition to your dedicated, expert consultant. In other words, how much time we spend creating your work of art. 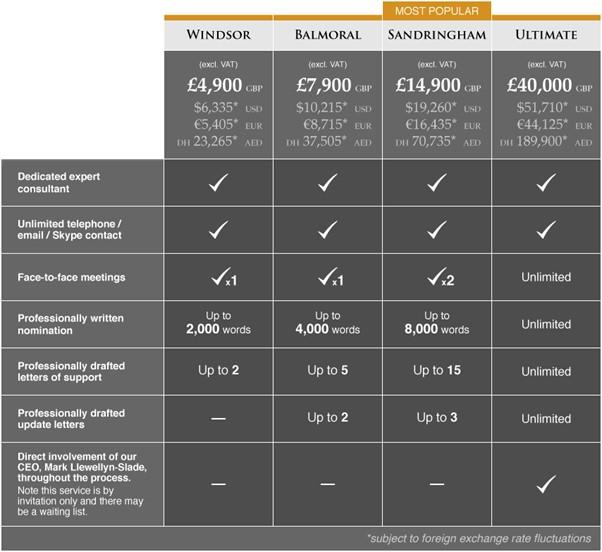 At Awards Intelligence we spend 100–150 hours crafting a typical honours nomination. Many people just don’t have that amount of time to commit to it, with work and family priorities.

But, if you divide our fees by 150 they don’t actually look too expensive. We could spend less time on each nomination – and charge less – but we refuse to do that.

Why not, you may be thinking? Because we refuse to compromise on quality. If we spend less time on the nomination it is less likely to be successful. This is in no one’s best interests – yours or ours.

You will be less likely to get what you want i.e. a Queen’s honour, and our success rate will also fall through the floor – it won’t be an industry-leading 2 in 3 anymore.

Then people will, quite rightly, start to question the point of using the experts at Awards Intelligence. This will ultimately lead to us all being out of a job.

A Queen’s honour is the most prestigious award in the world and is globally recognised. It’s a life-changing achievement for most people.

It will raise your profile, enhance your reputation and instil trust, that vital ingredient for success in all walks of life.

Our clients tell us that it’s the most powerful piece of marketing/PR that they have ever done for themselves or their cause and that it has paid for itself many times over.

Anything really worth having doesn’t come easy (or cheap) and you owe it to yourself to give it your best shot.

Can you guarantee that I will get a Queen’s honour if I appoint you?

Another cracker of a question.

The average success rate across all honours nominations is estimated to be about 1 in 10 (just 10%). As I mentioned above, our success rate is an industry leading 2 in 3 (about 65%). Why are you 6.5 times more likely to succeed with our help?

Because we are experts in our niche and the best at what we do. We have honed our skills on over 900 nominations during the last 13 years and have learned what works and doesn’t work. It’s like most things in life: if you do something enough times you tend to get good at it!

Why don’t we have a 100% success rate? The main reason is that we can’t control the quality of the other nominations being judged alongside yours.

Having said that, the Cabinet Office will often carry over a strong nomination to the next list if they think it may well make the grade next time around.

How do I know if I or my nominee have a strong chance of honours success?

It said that, from now on, it wants to highlight and reward people who fit one or more of the bullet points below. Its ‘Big 5’ honours priorities are people who:

So, it’s very clear: if you or your nominee can tick at least one of these boxes, crack on with the nomination.

That’s not to say people who fall outside these 5 priorities – for example, a campaigner making a difference – have no chance of success. Whatever the person’s background it needs to be outstanding in some way.

We all know that timing is everything in business and life in general, so don’t delay. You now know what the government wants. If you can clearly and compellingly demonstrate the above requirements through a well-crafted nomination, the odds are now stacked in your favour.

BUT, goalposts have a habit of moving, as I’m sure you appreciate, so don’t delay – take decisive action now!

Any worthy person based anywhere in the world, who meets the criteria, can be nominated for a UK honour such as a BEM, MBE, OBE, CBE or knighthood/damehood. You can nominate someone if they live or work in the UK or abroad and they’ve made achievements in either:

Nominees who are not British citizens can be given an ‘honorary award’.

If you are not sure and would like a free, honest assessment of your or your nominee’s chances, just contact us at enquiries@awardsintelligence.co.uk and we will set up a call with one of our experts.

I hope that was helpful.

P.S. Do drop me a line at enquiries@awardsintelligence.co.uk  if you have any burning questions that you would like me to address in my next email to you.

BACK TO THE HUB
CONTACT US
We use cookies on our website to give you the most relevant experience by remembering your preferences and repeat visits. By clicking “Accept All”, you consent to the use of ALL the cookies. However, you may visit "Cookie Settings" to provide a controlled consent.
Cookie SettingsAccept All
Manage consent

Read more about the individual cookies we use, their duration and how to recognise them by clicking Read More
Necessary Always Enabled
Our website uses necessary cookies. A cookie is a small file of letters and numbers that we put on your computer which are essential for the website to function properly and which help to provide you with a better online experience. These cookies cannot be switched off and do not store any of your information.
Functional
Functional cookies help to perform certain functionalities like sharing the content of the website on social media platforms, collect feedbacks, and other third-party features.
Performance
Performance cookies are used to understand and analyze the key performance indexes of the website which helps in delivering a better user experience for the visitors.
Analytics
Analytical cookies are used to understand how visitors interact with the website. These cookies help provide information on metrics the number of visitors, bounce rate, traffic source, etc.
Advertisement
Advertisement cookies are used to provide visitors with relevant ads and marketing campaigns. These cookies track visitors across websites and collect information to provide customized ads.
Others
Other uncategorized cookies are those that are being analyzed and have not been classified into a category as yet.
Non-Necessary
SAVE & ACCEPT
Powered by